If you want to know how people made calendars thousands of years ago, peaking through little holes in big rocks, or the temples where they performed their religious rituals, and want to spend a beautiful day, go to Kokino. It is not as far as Stonehenge, it is just 35 km away from Kumanovo, at an altitude of 1013 meters. 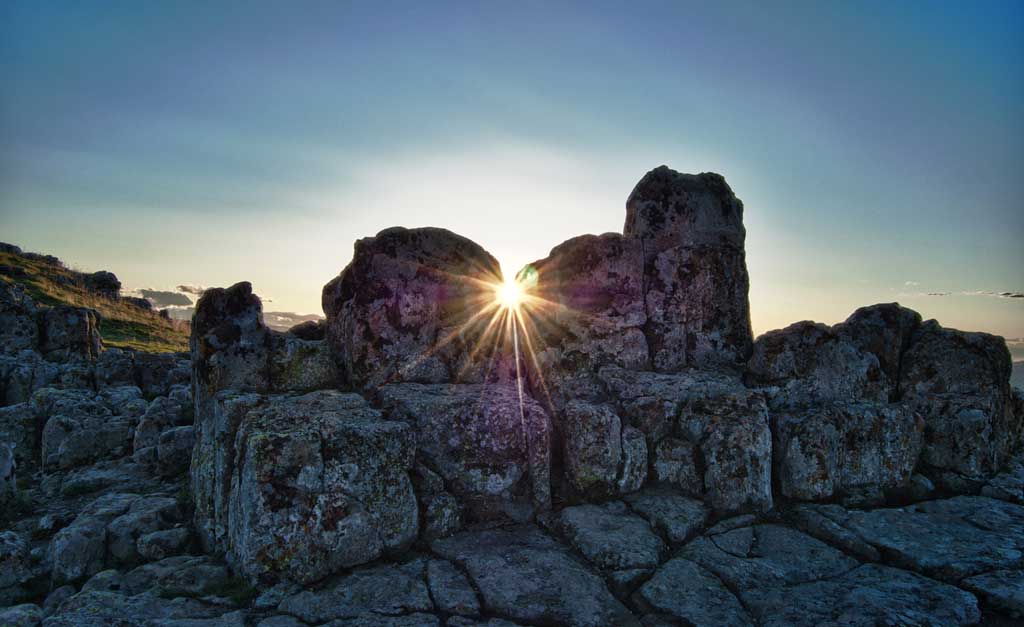 According to experts, it is a megalithic (megalith – big rock) observatory that is one of the oldest in the world. In 2005, NASA ranked Kokino fourth, according to age, behind Abu Simbel in Egypt, Stonehenge in Great Britain and Angkor Vat in Cambodia.

The sunrise at Kokino all around world media

Photos of the sunrise at Kokino became photos of the day in many world media. The appearance of the hemispherical marker at the Neolithic observatory was published in “Washington Post”, “Los Angeles Times”, “Chicago Tribune”, etc.

The sunrise lovers gather at that day over the last few years, without getting any sleep, to see the wonderful moment that can be seen only once a year. According to their testimonies, the sun rises round 5 a.m. and passes through the marker at around 06:10 a.m. The sight is amazing at that moment. All the people are squeezing in about 3 m2 because that’s the spot from where the passing of the sun through the marker can be seen best.

Every year on 21st June, Kokino is visited by dozens of people. Few years ago, the folk instrument virtuoso Dragan Dautovski, celebrated the sunrise playing the Neolithic flute – the ocarina. There are many other artists that wait for the glorious moment performing.

Over the last ten years, there have been attempts to reconstruct the way the junction between sky and earth, and the birth of the new life were celebrated here, in Kokino, 4000 years ago. Archaeologist Jovica Stankovski, who has to receive the most credit for Kokino’s discovery, says that the ritual was performed at the time in a way that the supreme preast, who was probably the tribe chief at the same time, was sitting on the throne and said prayers at the moment when the sun rays reached him. According to Stankovski, this ritual, also known in science as the holy marriage between the heavenly gods and the earth (Ioros-gamos), was supposed to bring fertility and renewal of nature.

The municipality of Staro Nagorichane is also included in the observatory’s promotion. The church, however, is accusing them of returning the paganism in Macedonia – “… the pagan holiday of Xantika, the folk customs are put above the religious celebrations and there are even attempts to resurrect the pagan cults.”

Sanctuary of the sun

If you decide to visit this incredible place, learn a bit before that. Read something, or look at some photos. Luckily, there are plenty of them on the Internet. Take a look at the website about Kokino and get acquainted with the basic facts before going there. Otherwise, all you’ll see is plain rocks.

And, as such, rocks aren’t much of a sight. It can happen that nobody is there to tell you where the sun sets and where the moon rises. So, if you learn something before you go, you can live out your own story about the Bronze Age, around 1.800 years B.C., as experts claim.

The archaeological site “Tatikjev kamen” is a larger hill that is dominating the environment and the village of Kokino at the base with its size. It is said that one of the rituals, probably related to fertility and the Great Goddess – Mother, was performed so that dishes full of fruits were laid in the rocks and buried with sand and stone.

The second ritual related to the sacred junction of the heavenly divinity, the Sun, with the Great Goddess – Mother, personified as a rocky mountain top, was performed in mid-summer (presently the last day of July). On that day, the rays of the morning sun that appeared behind the ritual marker at the highest part of the site went through the artificially cut trench, 20 meters under the marker, lit only one of the participants of the ceremony that sat on one of the few seats made of rock at the lower (western) platform of the site. Both rituals were performed for greater birth and cyclic renewal of the nature.

The calendar of the Kokino observatory, with a 19-year cycle, was made based on the marking of the rises of the moon. The creation of such a calendar is a top civilization realization of the prehistoric residents of this region and a proof of the good organization of their lives, as well as their spiritual culture, according to those familiar with the subject.

There is an asphalt road leading to Kokino and it also connects the villages of Dragomance and Arbanmeshko within the municipality of Staro Nagorichane.

According to Gjore Cenev, a researcher of the observatory and head of research on the field, nine regional and two local sanctuaries have been discovered in the wider region around Kokino. The discovery of these sanctuaries in the north-east part of Macedonia, which are inaccessible from three sides and have altar spaces and megaliths with gift areas, some of them even animal-shaped, point to a culture that existed at the same time as the Minoan civilization and has the samecharacteristics as the Hittites in Anatolia and the Mesopotamians that lived in the 19th and 20th century B.C.

The discovered artifacts showed that Kokino has the characteristics of a mythical holy mountain and an ancient observatory. The archaeological researches have shown that it is one of the richest archaeological sites from the Bronze Age in Macedonia that was certainly inhabited during the 7th century B.C.

The good visibility from the highest part of the hill, which is reachable through a wider access track, lit by the sun, means that the holy mountain was used for rituals, performed according to the beliefs of the inhabitants at the time. The rocky top was the place were gods resided and that is your immediate connection to god. Kokino is spread across two platforms. The observatory is around 90 meters long and around 50 meters wide.

At first sight, the thrones, set in the north-south direction, are the most remarkable. The one who sits there is facing east and the eastern horizon, which gave the archaeologists the idea that it was from this place that the stars that rose from the horizon were observed. However, the astronomical measurements and analyses showed that the thrones were a sacred and ritual spot and were not related to astronomical observations.

Experts say that the stone markers of the megalithic observatory Kokino were used to mark the sunrise during the winter and summer solstices and the spring and autumn equinoxes. The markers also followed the movements of the moon. The seven markers, the four main positions of the moon and the three main positions of the sun during the course of a year, which should be visible from the same spot, or the lines going through the markers, intersect at one point, which is actually the central point of the observatory. 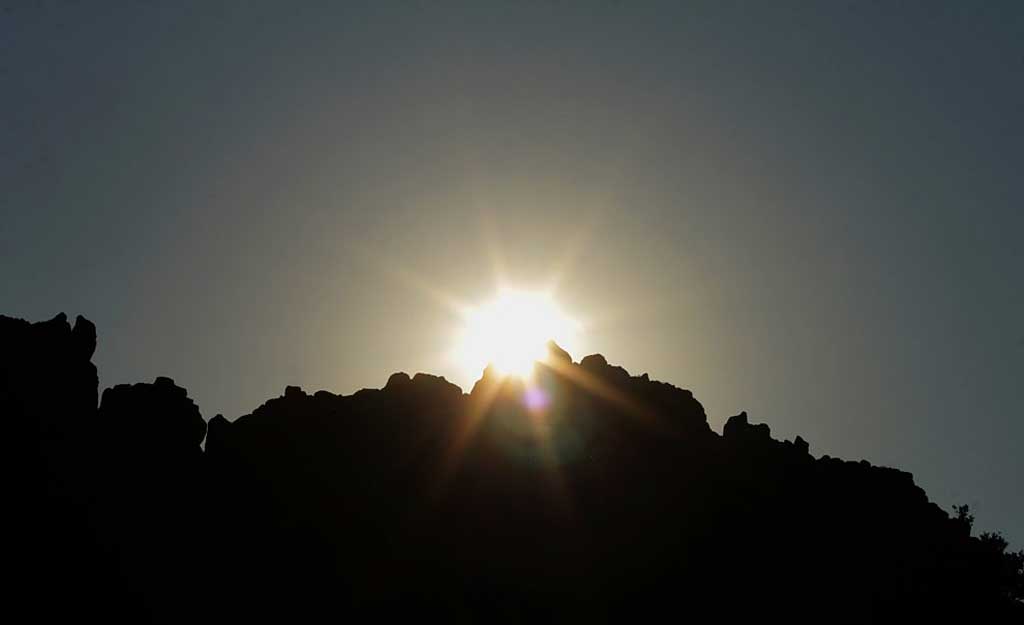 That is how the calendar helped organize the religious life of the community. Those rituals, related to the Great Goddess Mother, the Sun God and the day of the harvest, are a testimony to the developed cosmogony, built in the imagination of the inhabitants that lived in this region in an age marked as bronze in the development of human civilization. Experts say that Kokino is a complex site that was also a sacred mountain where several cults were performed, and according to researchers, one of them was definitely the cult of the Great Goddess mother (Magna Mater), the mother of all gods.

Another cult was probably the cult of the holy matrimony between the Mother Earth and the Sun, dating from the second millennium B.C. when the rocky mountain top was personified as the body of the Goddess Mother – Mother Earth. In certain time periods at these spots, the first sun rays that fell marked the beginning of the holy connection between the Earth and Sun (the Earth’s impregnation by the Sun), something from which everything in nature will come to life.

But, I think that to put stones that big, to carve them and observe the earth and moon, and to please God, is not enough. I really think that Kokino could even have been a plant for collecting energy (electricity).

NOTE: Originally published by Macedonian Information Agencay MIA, but was deleted (or censored?) after government change in Macedonia after 2016.