- October 23, 2016
Delved into the lush greenery of the nicely decorated yard surrounded by stone walls, just several kilometers above the village of Kuchkovo, near Skopje, is the “Saint George” monastery. Centrally located and yet hidden from plain sight is the eponymous church, filled by the joyous baby sounds of little Sara, who had just been baptized. 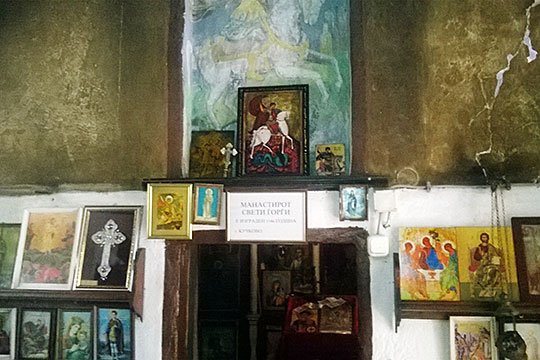 This church, which has been a Christian sanctuary for the people of the western part of the Skopje valley since the XIV century, is a realm of piece and serenity.
The monastery is open every day, but attracts the most people on 6th May, St. George’s Day, the monastery’s holiday.


Built before the arrival of the Ottomans
The first record of the monastery dates back to 1885 in a local Constantinople newspaper, when Jordan Hadji Konstantinov – Djinot wrote that “the church is beautiful and holds many manuscripts”. There is an inscription above the entrance stating that it was built in 1346. There was also a plate to confirm that, which had been removed for restoration.
Despite being small in size, the “St. George” church has impressive architecture, frescos and icons. The donor of the church is unknown, but it can be assumed it was built by the locals considering the year of construction and its size. Based on the researches, experts say that there are two layers of frescos. The current one dates back to the XVI century, while based on the inscription, the original layer, underneath the current, dates back to the XIV century. This is confirmed by Dr. Dimitar Kjornakov, prominent art historian and author of several books about Macedonian churches and monasteries. He thinks that the frescos in the first zone have been retouched i.e. repainted. The upper sections are darker and are even damaged at places, meaning that they haven’t been retouched. The frescos from the XVI century are located in the altar area and the narthex.

From an architectural point of view, the church is small, with a semi­circular arch, an altar apse on the eastern side and one entrance on the western side. A closed porch was built on the western side, probably in the XIX century. There is an iconostasis with throne icons, two of which are the most valuable. The icon of Saint George, the church’s patron, is on the left. There are two inscriptions in the lower part, stating that it was made by painter Nove from the village of Sushica and that it was finished in 1838.

The second icon is the one of Saint John the Baptist from the XIX century. It was made by an unknown author. The royal doors are carved and date back to late­XIX century, also by an unknown author. In one of the rooms at the hospices there is a wooden plate depicting the Saint Apostles, only the right half of which has been preserved. The inscription on the plate states that it dates back to late­XVI century. The monastery was a nunnery from 1918 to 1942, with 12 nuns living in it. From 1946 for a long period of time, a monk and a guard took care of the monastery, after which hieromonk Naum from Zletovo was in charge for more than two decades. During this time the church was fortified and all the auxiliary rooms, the rooms for the monastic brotherhood and the bell is the place of many cult places, holy water springs, holy trees, rocks, etc. The beliefs related to those sites are still strong in this region. Those are local customs that aren’t practiced in other areas in the Skopje region, making them indigenous to Kuchkovo. One of the most legendary sites near Kuchkovo is a rock known as The Girl’s rock.

There are several legends and myths about the rock. According to Dr. Marko Kitevski from the Institute of Macedonian literature and a collector of Macedonian cultural wealth, one of the legends states that the rock was named after a girl who took care of the cattle when she was blown away by a strong wind into the rock. Another legend says that she was dancing with her friends when the wind blew her away into the rock. Anyhow, women with no, or little, breastmilk, as well as people suffering from all kinds of diseases have been coming to the rock for a long time. They leave money, light candles, circle the rock with a red thread or perform different customs, believing they would be cured, be able to breastfeed or have a wish come true. This tradition still exists, with some of the women unable to breastfeed even scratching the rock, boiling it in water and drinking it.

“One of the most unique beliefs is that if the shirt of an ill person or a woman with no children is taken to the Girl’s Rock on the Day of the Forty Martyrs so that the snakes coming out of their lair make contact with it, the illnesses would disappear and those women would be able to have children” – says Dr. Kitevski.

The professor says that researchers of folk culture were also interested in the huts that the girls from Kuchkovo built around the Day of Saint Demetrius and would work on their dowry until the Day of Saint George. Each neighborhood had its own hut. They were built by the girls, usually on a threshing floor. They were circular and were unusually symmetrical. Five to eight girls were able to prepare their dowry at the same time. These huts could be found in other villages in the Skopska Crna Gora Mountain.
Keti Mickovska
Tags:
Religion Travel